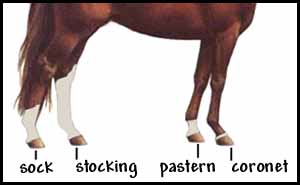 Just like humans wear socks that are peds, ankle, mid-calf and knee-hi’s, our horse friends sport their own leg markings, which are usually named based on the highest area of the leg they cover. No two markings are the same, making them unique to each and every horse.

From shortest to tallest, common leg markings are:

Other terms used to describe leg markings are listed below:

Leg markings can vary greatly in size and shape and are very helpful to describe or identify a horse. They can be used in the same way fingerprints are used to identify humans. In the end, it’s good to know that all socks aren’t created equal when it comes down to identifying your horse.