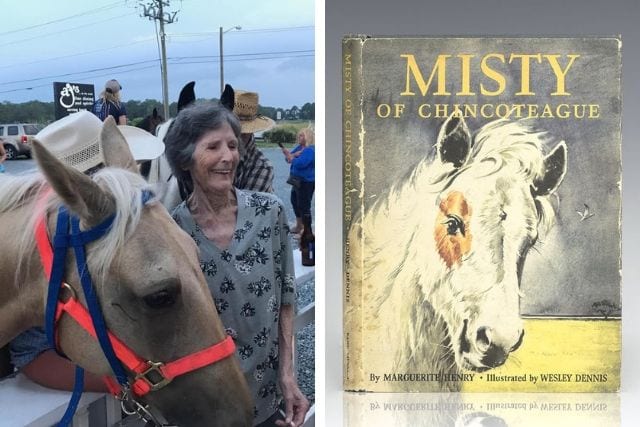 I have always been aware of things that seem to happen to me and around me. Some call it a sixth sense or a heightened sense of awareness. To me it is just the way it is, but I always pay close attention to it.

Just two days ago I chose to feature Misty of Chincoteague in my Spotlight blog. I don’t know why I chose Misty, but it felt right that I feature her story. I left out the part that the only human still alive from that story was Maureen Beebe, the little girl who played such a huge part in Misty’s story and an even bigger part to the people of Chincoteague.

Sadly, I just learned that she passed away over Memorial Day weekend. Here is a tribute to her life from the Chincoteague Volunteer Fire Department:

“It is with great sadness that the Chincoteague Vol Fire Co announces the death of our dear friend, Maureen Beebe. A true Chincoteague icon with a huge heart and huge personality. She was so much more than the little girl depicted in the MISTY book. She was a legend, a testament to good works, a heartfelt soul who cherished her independence and her family. This island will never be the same and we as individuals and company as a whole have been forever blessed by her gift of love and friendship that she bestowed to each of us. Ride high Maureen, we will love you forever!”