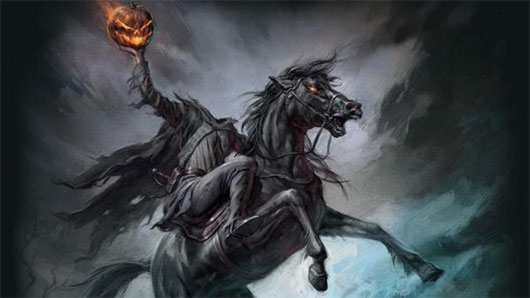 Everyone knows the tale of Sleepy Hollow and its terrifying headless horseman who roams the town during the month of Halloween, or do they?

Considered to be America’s first ghost story and its scariest, the tale of Sleepy Hollow, written in 1820 by Washington Irving, actually dates much farther back in time than most of us know.

The idea of a headless rider was not invented by Irving. Headless horseman can be found dating back to the Middle Ages including stories written by the Brothers Grimm, but the true origination began in Ireland with the legend of the “Dullahan.” In Irish and Dutch folklore, the Dullahan was a headless rider whose presence brought the omen of death. It was said that the rider would call out a name and the fate of that unfortunate person was sealed with death. If one threw a gold coin across the path of the Dullahan, their pending doom would be avoided.

Variants of the headless horseman are found throughout Europe including the Wild Hunt, which can be seen night night sky. These stories made their way across the Atlantic ocean to the shores of America where Irving probably picked up on it and created the tale of Sleepy Hollow.

Another thought as to where Irving got his horseman idea came from his association with Sir Walter Scott, who wrote, “The Chase,” in 1796 based on a German poem The Wild Huntsmen. The poem tells the tale of a man doomed to be hunted by the devil and the ‘hounds of Hell’ for his wicked deeds.

Others believe that Irving based the story on a real Hessian soldier who was beheaded by a cannonball during the Battle of White Plains around the time of Halloween.

No matter how Irving came up with the idea, every American knows the story of Sleepy Hollow. It takes place in New York in the village of Sleepy Hollow. A newcomer, lanky in statue, named Ichabod Crane, comes to town as a schoolmaster. and develops a desire for the famous heiress, Karina van Tassel. Katrina is being pursued by the Dutchman, Brom Bones. One night at a party at he van Tassel farm, where ghost stories are being shared, Katrina turns down Ichabod’s advances. Defeated, Ichabod mounts his slow, decrepit steed and is chased by a headless horseman on his giant, fire-breathing stallion. Ichabod crosses a covered bridge, halting the headless rider in his tracks, who then hurls a pumpkin at Ichabod, knocking him from his horse and the schoolmaster is never seen again!

What makes the story so captivating is that it uses real names like van Tassel and Ichabod Crane as well as real places like Sleepy Hollow and interweaves some Revolutionary war history in with fantasy and imagination, making it a true American classic that still haunts all of us during Halloween.

Breyer has never made a model of the this character, but above are a few custom creations of the Headless Horseman. Be careful out there lest you be the next victim!