Home Breeds A Horse of Many Names 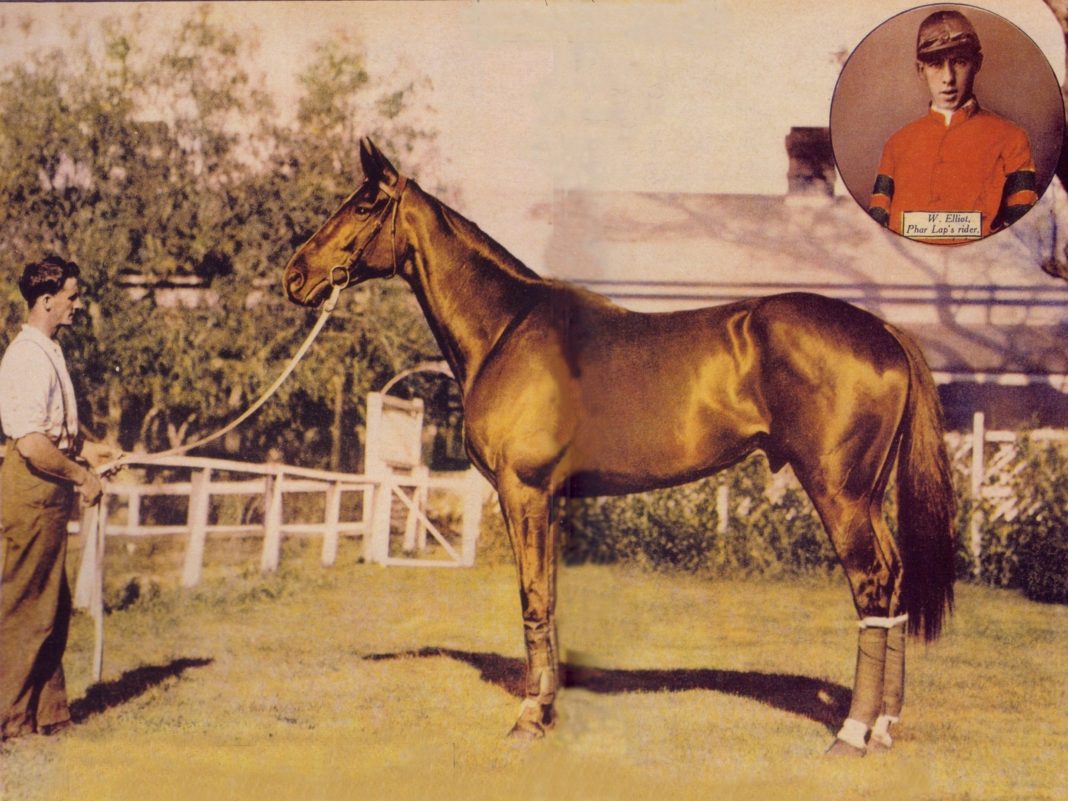 Known as “Big Red” or the “Red Terror.” Phar Lap was a big, lanky looking underdog in racing during the time of the Depression. He was purchased for a measly 160 guineas, the equivalent of $130 US dollars by an American man named David Davis and trained by Harry Telford.

Phar Lap and his trainer were seen on the circuit as battlers and were often the talk of the people who were happily distracted from the woes of the Depression by this fiery horse.

His greatest victory was at Agua Caliente on March 20, 1932. It wasn’t so much the race he ran, but his journey leading up to his achievement. He faced the most adverse conditions a horse could face prior to a demanding race. He was shipped across the Pacific in cold conditions to San Francisco and then hauled over land more than 800 km to Tijuana where temperatures were extremely hot. Upon his arrival, his body clock was preparing his winter coat since he was from Australia, but it was full on summer in Tijuana.

So many odds were stacked against Big Red. He was on foreign soil. He had to carry a heavy load against well adjusted American horses. He suffered a heel injury forcing him to carry heavy bar shoes for the first time and his rider was inexperienced in the “Big Time” races and dirt tracks. It seemed there was just no way a horse like this could have a chance at winning, but as fate would have it, they were so wrong! Phar Lap not only circled the field from behind to win by two lengths, but he set a track record time of 2.28 clipping .2 off the previous record.

Phar Lap was known by many names. After that win at Agua, Americans came to call him the “Wonder Horse” along with “Big Red” and “Red Terror.” To his jockey, Jim Pike, he was “Old Boy.” His owner, David Davis, called him “Big Fellow,” and his trainer simply referred to him as “Bobby.” To the racing fraternity he was known as “Phar Lap,” champion of the world.

His race record after Agua Caliente was brought to an amazing 37 wins, two seconds and three thirds in 51 starts. He was unbeaten at 1¼ miles (seven wins); 1½ miles (eight wins); 1¾ miles (three wins) and 2¼ miles (one win). He also won the 1930 Melbourne Cup carrying 15 lb., which was more weight than any other horse for his age. Phar Lap started as the favorite in three successive Melbourne Cups and was the only horse in the long history of Australia’s most famous race accorded that distinction.

Phar Lap became the most public horse of all time not because of his racing career, but because he was shrouded in mystery, drama, wickedness, savage cruelty and controversy. On the morning of his run in the 1930 Melbourne Cup, criminals attempted to shoot the horse, but their plan was thwarted. At the young age of five, he suffered an unusual and tragic death in California on April 5, 1932. As the story goes, he was being ridden while being chased by some men and when faced with no where else to go, he and his rider jumped off a cliff into the ocean below. To this day, his death remains a mystery. It’s like he just vanished into thin air.

Phar Lap has been immortalized by Breyer with his own model.