Home Region England The Legend of the Pale Horse 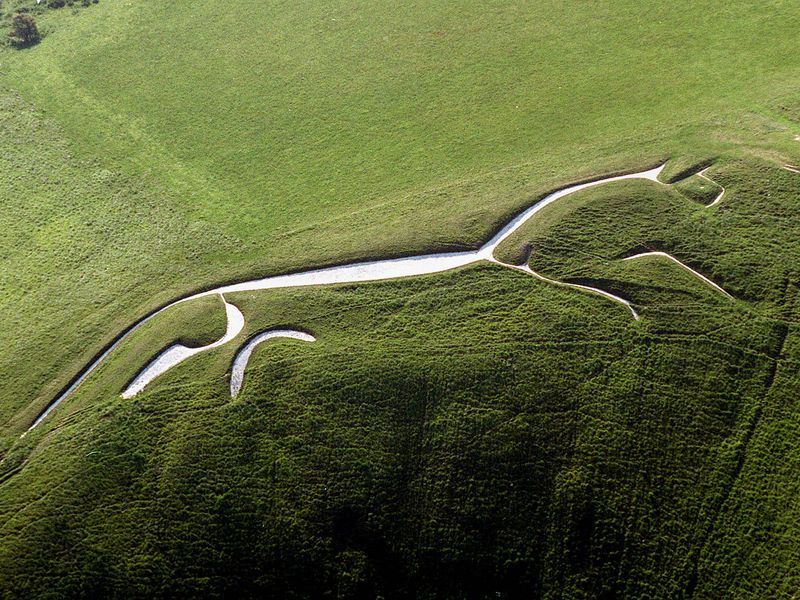 If you stand in the valley of Uffington in Oxfordshire England and look upward to the chalky hills above, one peculiar form will dominate the scene. An enormous abstract stick figure of a horse graces the side of the hill. It’s not an actual figure made from sticks, but rather a unique figure carved into the chalk of the hill itself. The result? The famous white horse of Uffington!

These hills are unique with their snow-white chalk “soil,” and this isn’t the only horse carved into these hills, but Uffington is the oldest carving dating back 3,000 years, measuring the size of a football field and able to be seen from 20 miles away. It’s definitely a sight to behold.

Measuring 360 feet long and 130 feet wide, the white horse’s unusual flowing shape is very similar to those on Celtic coins dating back to 150BC! Consisting of a square head, round eye, long flowing back and tail with thin, disjointed legs. It is the most unique of all the other white horse geoglyphs that exist in the surrounding hillsides.

The great white horse was thought to have been created during the Anglo-Saxon era by either King Alfred as a celebratory emblem to commemorate his victory over the Danes in 871 or by Hengist, the first Saxon king, whose emblem was a white horse. Some say the white stick horse represents St. George’s horse while others surmise it is the legendary vanquished dragon that he slayed from nearby Dragon Hill. One thing is certain, it’s extremely ancient and has stood the test of time.

To preserve the 3,000-year-old pictogram, a custom, known as “Chalking” has been performed by people far and wide every seven years or so. People gather with hammers and clean away the grass and the overgrowth that threatens to devour the great white horse. This work today is overseen by the National Trust, a conservation organization. Anyone can participate in the cleanup and people come from all over the region to take part in maintaining this amazing and awe-inspiring sight.

To top this all off, Breyer created a special ticket model for Breyerfest 2021 to honor the great chalk figure and I must say that I am one of the lucky ones who was able to purchase him. No matter what the real story is behind this wonderful horse, he will hopefully continue to run free above the hills of Uffington forever, thrilling future generations of horse lovers far and wide.

Extra Tip: Audible has a book that I accidentally happened upon. I highly recommend it! It’s set where the Pale Horse runs free and it’s a murder/mystery. Check it out! It’s titled, “A Pale Horse,” by Charles Todd. Enjoy!