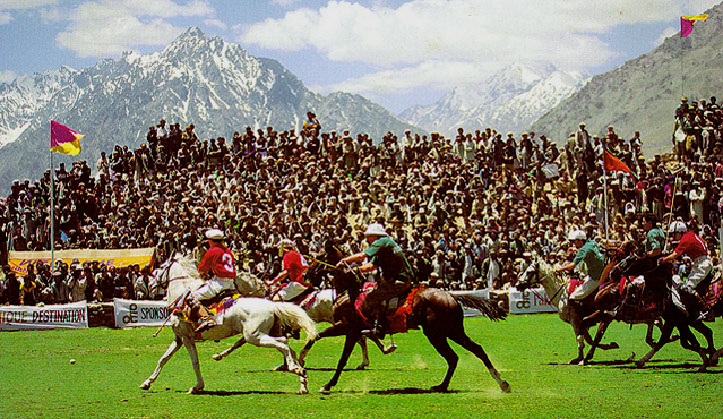 The ancient game of Polo, also known as the Game of Kings and the King of Games, is a team sport played with mounted riders on very fast Polo Ponies! It almost resembles a game of golf played on horseback! Let’s take a closer look at what is considered one of the the world’s oldest known team sports.

Polo (the English word, polo is the Baltic word meaning “ball”) a game of Central Asian origin, was first played in Persia (Iran) at dates given from the 6th century BC to the 1st century AD. Polo was at first a training game for cavalry units, usually the King’s guard or other elite troops practiced the sport. From there it spread through all of Persia and beyond. It is now popular around the world, with well over 100 member countries in the Federation of International Polo . It is played professionally in 16 countries and it was an Olympic event from 1900 to 1936.

From Persia the game spread to Arabia, then Tibet, China and Japan. In one game played in China in 910 BC, the death of a favored relative in a match prompted Emperor A-Pao-Chi to order the beheading of all surviving players! I hope the ponies all lived (they did, don’t worry)!

In the 13th Century, Polo was introduced into India by the Muslim conquerors. Although the game had been described in Sir Anthony Sherley’s Travels to Persia (1613), the first Europeans to play the game were British tea planters in Assam, who formed the first European polo club in 1859 at Silchar. The Calcutta Polo Club was formed in the early 1860s.

Polo spread rapidly after a captain in the 10th Hussars, stationed in India, saw a match in 1866 and immediately formed a team from among his fellow officers. Before the year ended, informal matches were being held between British cavalry units stationed in India.

In 1869 a challenge round was held between the 10th Hussars and the 9th Lancers in England. At this time there were eight men to a side and almost no rules. Polo grew rapidly in England, with matches at Richmond Park and Hurlingham attracting more than 10,000 spectators by 1875. After it had been introduced by the military, the sport of polo remained popular with them, but also spread to the universities and was popular with nobility and royalty.

In 1876, the sportsman and newspaper publisher, James Gordon Bennett, saw his first polo game and introduced it in the United States. Later that year, informal games were being played in New York City and by 1877 at Jerome Park racetrack in West Chester County, N.Y., where the West Chester Polo Club was founded later that year. In 1881 the Meadow Brook Club was formed in Long Island, N.Y. by such early outstanding players as Thomas Hitchcock, Sr., August Belmont and Benjamin Nicoll.

Polo spread throughout the country, although the game long remained one for the rich because of the expense of acquiring and maintaining a stable of polo ponies. Outside of the United States, the game’s governing body is the Hurlingham Polo Association, which maintains relations with many national organizations.

Restrictions on size were removed after World War I, and the term pony is purely traditional. The mount is a full-sized horse and should have docility, speed, endurance, and intelligence. The pony is judged to be 60 to 75 percent of a player’s ability. At first only Thoroughbreds were used, but horses of mixed breeding are now common. Many of the best ponies are bred in Argentina or in the Southwestern or Rocky Mountain regions of the United States, where they are broken early and worked as cow ponies to increase their agility skills. A training period beginning at about age five lasts from six months to two years. Ponies reach their peak at about age 9 or 10, but, barring accidents, may play until age 18 or 20 years of age.

The defending player has a variety of opportunities for his team to gain possession of the ball. He can push the opponent off the line or steal the ball from the opponent. Another common defensive play is called “hooking.” While a player is taking a swing at the ball, his opponent can block the swing by using his mallet to hook the mallet of the player swinging at the ball. A player may hook only if he is on the side where the swing is being made or directly behind an opponent. A player may not purposely touch another player, his tack or pony with his mallet. Unsafe hooking is a foul that will result in a penalty shot being awarded. For example, it is a foul for a player to reach over an opponent’s mount in an attempt to hook.

The other basic defensive play is called the bump or ride-off. It’s similar to a body check in hockey. In a ride-off, a player rides his pony alongside an opponent’s mount in order to move an opponent away from the ball or to take him out of play. It must be executed properly so that it does not endanger the horses or the players. The angle of contact must be safe and can not knock the horse off balance, or harm the horse in any way. Two players following the line of the ball and riding one another off have the right of way over a single man coming from any direction.

Like in hockey or basketball , fouls are potentially dangerous plays that infringe on the rules of the game. To the novice spectator, fouls may be difficult to discern. There are various degrees of dangerous and unfair play and penalty shots are awarded depending on the severity of the foul and where the foul was committed on the polo field. White lines on the polo field indicate where the mid-field, sixty, forty and thirty yard penalties are taken.

The official set of rules and their interpretations are reviewed and published annually by each country’s polo association. Most of the smaller associations follow the rules of the Hurlingham Polo Association, the national governing body of the sport of polo in the United Kingdom, and the United States Polo Association.

After 1909 the style of the game changed from the relatively slow English form of play characterized by short, controlled hitting to that of the American polo players using a long-hitting, fast-moving, wide-open style that revolutionized the sport. The rules of the two countries were eventually assimilated, the United States adopting the English rule permitting a player to hook an opponent’s stick with his mallet, while the English abandoned their offside rule that forbade players preceding the ball.

From 1909 to 1950 the United States was supreme in polo. Through the 1920s and ’30s polo became increasingly popular in Argentina, and in 1928 the first Copa de las Americas (Cup of the Americas) was contested between the United States and Argentina. Since then, Argentina has become the uncontested master of international polo. Polo became the Argentine national game, and crowds exceeded 60,000. International matches commercially sponsored (mainly in Boca Raton, Fla.) were held in the 1970s, and European championships were inaugurated in 1980.

Although in the 20th century it is far from common, British and American women also play polo. In the United States, women compete against women on the collegiate level, and there is a women’s National Handicap competition. Occasionally a woman also acts as the fourth member of an otherwise all-male team.

The Legend of the Pale Horse

Pinch Me…I Must be Dreaming!