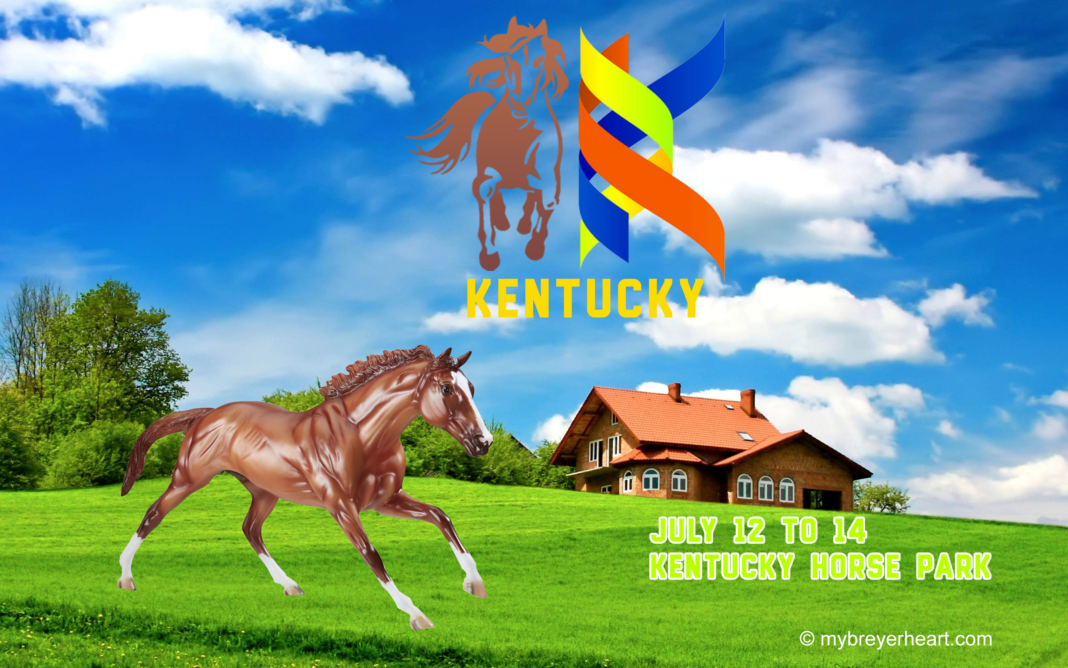 BreyerFest was first held in 1990 and since then has been held annually in July at the Kentucky Horse Park in Lexington, Kentucky. This popular event is a three-day festival for model horse collectors of all ages.

BreyerFest was first held in 1990 and since then has been held annually in July at the Kentucky Horse Park in Lexington, Kentucky. This popular event is a three-day festival for model horse collectors of all ages. During this event, attendees can purchase special run Breyer models sold only at Breyerfest, purchase RR (Regular Run) and retired models from Breyer and dealers in attendance, and participate in large model horse shows.

In addition, there are classes on how to paint, customize, and repair models as well as lectures on collecting and judging them. Special guests of honor, usually renowned trainers and famous horses, are also present and perform for the attendees.

The equine guest of honor is always immortalized with its own Breyer model. A live auction is held each year featuring one-of-a-kind model horses created by Breyer and sold to the highest bidder, often for thousands of dollars, with the proceeds going to various charities. A silent auction for rare or customized models and model horse related accessories is also held. Included in the purchase price of a 3-day ticket is a Traditional-scale “Celebration” model, and 1-day ticket holders receive a Stablemate-scale model. Each BreyerFest has a unique theme, upon which many or all of the special-run models are designed.

Celebration Model: Designed and named for the celebrity guest horse attending the show, this Traditional series model is available for free at the event with the purchase of a three-day admission ticket. This year’s Celebration model is Oliver, an 11 year old Shire cross who serves on the Kentucky Horse Park police force.

Contest Prize: Breyer offers various contests for 3 Day Ticket holders like a costume or diorama contest, and awards winners with a limited edition model as a prize.

Judges’ Model: In early years models issued to collectors who helped at BreyerFest were referred to as Judges’ Models, as most of the people receiving them were judges at the live shows.

Live Auction: Each year Breyer auctions off a selection of one of a kind (OOAK) models after the daily show event on Friday or Saturday night. A portion of the sales proceeds is donated to one or more horse-related charities, with the models selling for hundreds and even thousands of dollars each.

Live Show Prize: Breyer awards models, frequently glossy ones made for the event, to winners at the BreyerFest live shows.

Raffle Model: Breyer sells raffle tickets at each event, with the proceeds benefiting a horse-related charity. In recent years there have been separate drawings on Saturday and Sunday. Ticket holders must be present to win. These models are highly collectible since only 25 are made for each day’s raffle.

Silent Auction: Customized model horses, along with both model and live horse memorabilia, are displayed during BreyerFest as part of the silent auction. During this auction bidders write down their high bid on the bid sheet in front of each lot. The highest bid at the close of the silent auction on Sunday wins the item and you must be present to win. While customized models are included on the BreyerFest pages when known they are not added to their respective mold pages, as this site focuses solely on original finish models.

Single Day Ticket Model: Guests who purchase a single day ticket to BreyerFest receive a Stablemate model instead of the Celebration Model (see above). In recent years four different Stablemate models have been available.

Special Run: A model sold only at BreyerFest and in limited quantity. At present each three day admission ticket to BreyerFest comes with a separate ticket allowing the bearer to buy two Special Run models at the Breyer store at a specified day and time. If you want to buy more than two of the Special Run models you must buy an additional three day admission ticket and stand in line a second (or third, or fourth…) time.

Store Special: A model horse available for sale only in the Breyer store at BreyerFest but not requiring a special run ticket (see above) to purchase. Usually limited to one per person.

Tent Special: In early years the Breyer store at BreyerFest was in a tent and special run models were referred as “Tent Specials.” The store is now held inside a building at the park and the models are now referred to simply as “Special Run” or “Store Special” models.

Volunteer Model: Volunteers selected to work at BreyerFest are awarded a model horse for their time and efforts.

Breyerfest 2019 is special not only because this is its 30th anniversary, but because this is the 1st year that we launch the My Breyer Heart website with its special features, Auction and Classified sites to help improve and enhance Breyer horse lovers and model horse collectors lives by offering them a unique community where they can list, buy and sell their beloved models. This is great news since before now collectors in the Breyer industry were limited to using ebay and craigslist and paying large fees to sell and buy their models, but now there is an exclusive site for auctions and classifieds for the Breyer horse collectors.