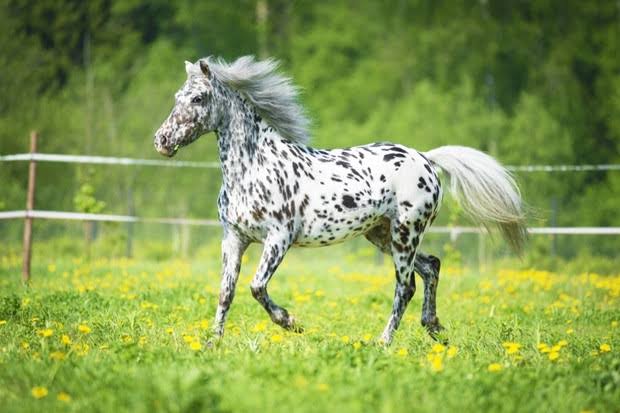 Spots before my eyes I see

a wondrous beast of color sees me

Quick! Come see what I do see

And tell me my eyes aren’t playing tricks on me!

Everyone loves a horse that stands out in a crowd. This is why so many of us enjoy the pinto and appaloosa breeds in real life and on our Breyer models. Most spots involve white patches of color, but did you know that there are other colors of spots that really make for some unusual colors and patterns on horses? Let’s explore a few.

Resembling their name, ink spots, cat tracks or paw prints, are often seen in homozygous tobianos and appear as colored spots in the white areas of their patterns. These spots can appear as only a few to dense areas of spotting and roaning. They tend to cluster around the solid patches of color and the coronet.

Dark spots that occur in white areas of the lower leg are called ermine spots. They are usually smaller in size, though they can be large on some tobianos.

In palominos and chestnuts, bend-or spots, also called smuts or grease spots, can show up in the coat resembling sooty patches of color. Most of the time, the horse will only have one or two of these spot, but some horses have a large patch that gives their coat a sooty look almost like a blood mark that one would see on a gray horse. These random spots usually show up once the horse is a few years old.

A mismark occurs when a gene in the genetic code for color gets turned off in an area on the coat of the horse resulting in some striking patterns, one of which would be the leopard appaloosa with a giant area of solid coloring due to a mismark. You can distinguish a mismark from a blood mark by its solid color and there are no signs of graying.

We have all heard of the bloody shouldered Arabian, but if images of red blood come to mind, that is not what we are talking about here! A blood mark occurs on gray horses and is simply a patch of gray that doesn’t gray as quickly as the rest of the coat. They usually show up on the shoulder or neck of the horse, however, some of the marks are so extensive, the horse is thought to be a pinto. The way to distinguish the breed is by the underlying skin, which will be dark under the white areas of color on a gray horse.

These spots get their name from the coloring used to describe an English Setter dog. Horses with these types of spots have them covering their white areas. They are unique because they can cover the entire horse including the face and the legs and they are not limited to pintos and tobianos either. A horse with belton spots can be quite striking to look at!

Some horses have reversed markings that mimic the shape and placement of where white markings would usually occur, such as on the legs and face. Reverse markings on the face of a horse are called badger face. On the legs, you’ll see a solid color with a band of white above it like at the knee. It’s like the horse had a white sock, but someone painted it solid leaving some white exposed above it. Reversed markings are easiest to see on horses when their face or legs are completely white.

By now you know that markings on horses aren’t always white in color. This is what gives us such a variety of the beautiful colors and patterns we see in these animals we love so much. One thing is for certain, each and every horse is uniquely colored. Hope you like seeing spots!