Home Breeds The Legend of the Medicine Hat Horse 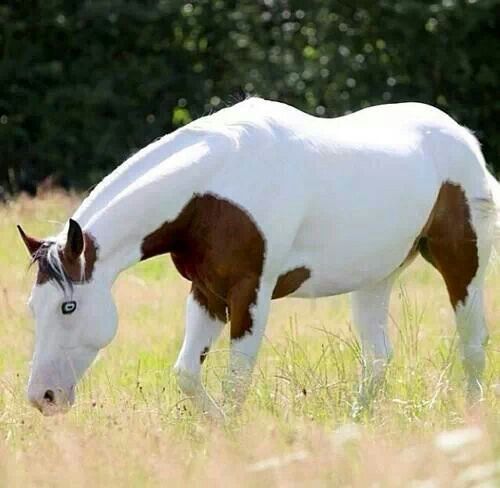 As the fighting waned on between the two tribes, there seemed to be no end in sight until suddenly a warrior, an Indian Brave, sitting a top a white pinto horse with blue eyes and markings covering his head like a hat and a shield of color on his chest appeared, The other tribe noticed and became fearful because this was a medicine hat horse, the most sacred and protected of all horses and it was now part of the battle against them. They immediately fled the battlefield and one tribe stood victorious because of the medicine hat horse.

Quite a powerful scene, but just where did the myth and legend of the Medicine Hat Horse come from? The Native American Indians spoke of a pinto horse, mostly white in color, that had blue eyes and pinto markings that covered the ears and top of the head like a bonnet, helmet or hat. Sometimes this horse would have a marking on his chest that resembled a shield. A horse with these markings was said be able to protect its rider from injury and neither bullets nor arrows could penetrate his shield or helmet.

It was believed that the less color the horse had, the stronger its magical powers were. It was also best if it had blue eyes or one blue eye, which was more desirable than brown eyes. Because of the horse’s magical abilities to protect its rider from death in wars and battles or out on the buffalo hunt, it was normally reserved for Chiefs, the bravest warriors or the medicine men.

The horses were protected since they were thought to possess supernatural powers. Other tribes would always try to steal the medicine hat horse from rival tribes in an attempt to steal the good luck from the other tribe and to gain protection for their tribe.

Breyer has made a few models of the Medicine Hat Horse. One was done on the San Domingo mold and the other on the Semi-Rearing Mustang mold to tell the story about San Domingo, The Medicine Hat Stallion, written by Marguerite Henry. Today, there are many medicine hats in Breyer’s model line up and many real life specimens as well.

Do you believe the legend of this magical horse?