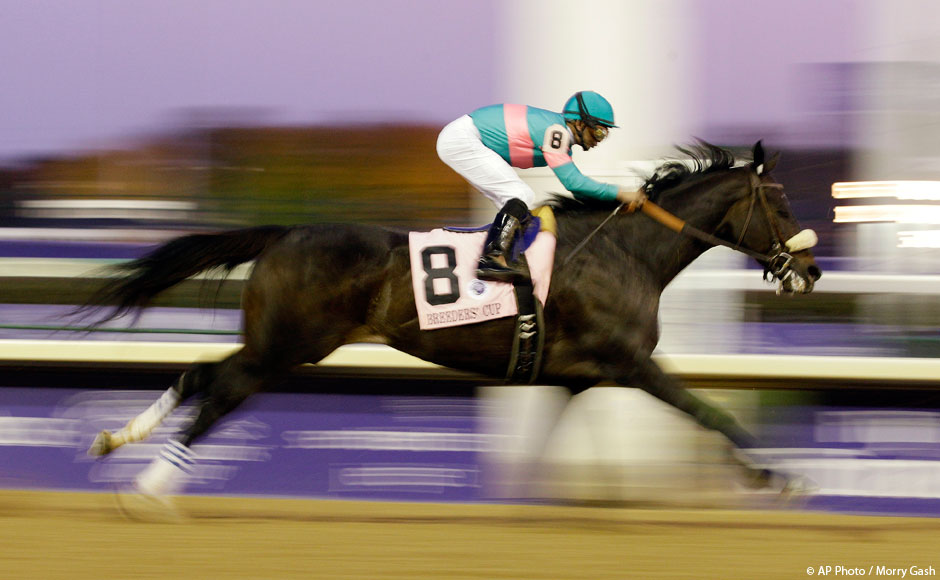 It’s not hard to see why Zenyatta, now a broodmare with three foals to her name, was considered the Queen of racing from 2007-2010, winning her first 18 of 19 starts in her track career. Her accolades are simply stunning!

#1 Zenyatta was born April 1, 2004, on April Fools Day, in Kentucky. She was bred by Maverick Productions.

#2 Zenyatta was purchased as a yearling at the low price of $60,000 because she suffered from a form of ringworm.

#3 She did not begin racing until she was three years old, making a winning debut in November of 2007 at Hollywood Park.

#5 Zenyattta was named after Zenyatta Mondatta, the third album by The Police, who were signed to A&M Rcords by her owner Jerry Moss.

#6 Zenyatta was sired by Street Cry, who also sired in the same season 2007 Kentucky Derby winner Street Sense. She is also half-sister to multiple Grade I winner Balance.

#7 Her favorite treats are sweet potatoes, pears, peppermints and GUINNESS. She prefers stout, and knows the difference!

#8 Zenyatta’s same connections, owner Jerry Moss, trainer John Sherrifs, and jockey Mike Smith won the Kentucky Derby with Giacomo in 2005, tying Mine That Bird as the second biggest long-shot to win the Derby.

#9 Zenyatta surpassed Tiznow, John Henry and Alysheba in all-time North American earnings (male or female) with earnings in excess of $7,304,580.

#11 At Del Mar, they use the Trakkus system for clocking how fast a horse is running during a race.  When Z won the Clement Hirsch in 2009, they clocked her “closing down the stretch” at 40+ mph.

#12 She was featured in O and Wmagazines, and profiled on 60 Minutes in 2010 prior to her historic attempt at 20 consecutive victories in the 2010 Breeders Cup Classic.

#14 Zenyatta loved her fans and enjoyed visiting with them all of the time.  There was not a day during the last few years she was in training and at BARN 55 that she did not have visitors. One Saturday morning November 2010, she had over 175 fans come to visit and she politely and elegantly posed for photos with each one of them.

#15 She was chosen to promote The Dodgers in 2010 and had her very own billboard in Los Angeles.

Pinch Me…I Must be Dreaming!