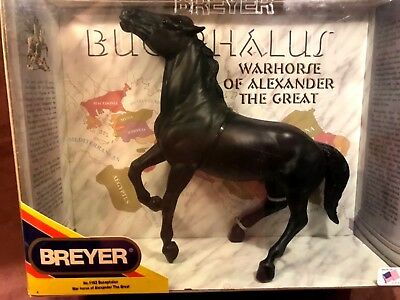 Today’s hero is the one of the most famous of all horses, Bucephalus. He was the great black steed of Alexander the Great. His name literally translated means “ox head,” befitting his massive head . He was thought to be of Thessalian descent and more specifically of the now extinct breed of Turkmenian.

Alexander was a stubborn and tenacious individual and once he made up his mind to do something, no matter how crazy it seemed, he did it. One such incident occurred when Alexander was only a mere ten years of age. He had been watching men trying to handle a large and wild black stallion to no avail. His father, King Phillip, was considering paying a small fortune for the beast, but decided against it when no one could tame the animal.

Alexander spoke up stating that the problem was not the horse, but all of the men who did not know how to handle the horse. His father asked him what consequence he would pay if he could not tame the horse and the arrogant boy replied that he would pay the full price of the horse himself, which was approximately $25,000 in today’s money.

The boy entered the ring and approached the stubborn and fiery black monster. Alexander was observant and had noticed that the horse was spooked by his own shadow. As everyone watched, he turned the horse towards the sun so no shadow could be seen and quickly swung himself up onto the back of the giant horse and rode off.

When he returned. his proud father said “My son, you will have to find another kingdom, Macedonia is too small for you.” That was the beginning of a fantastic friendship and war companion. Together they saw many battles and the kingdom expanded from Greece all the way to India.

Alexander rode Bucephalus in every battle and rumor has it that the brave animal was nearly thirty years old when he was mortally wounded in a final battle between Alexander and King Porus of India. Against all odds, the stallion carried Alexander to safety before succumbing to his wounds.

Alexander named a city in the honor of his beloved steed, Bucephalia. In history, there was no fiercer duo that the battlefield ever knew. Breyer immortalized this great horse with his very own model.